…the term “liquidity trap” was popular and being discussed around here.  It’s still an issue requiring discussion.  Beyond that, we could still use a jubilee and a return to the gold standard.  There is still no other permanent solution.  Presidential candidates like Bernie Sanders are discussing the former; nobody in media land is discussing the latter.  That’s a disservice to the public, but only one among many at this point.

In any event, if people want to understand our monetary system in a nutshell, they could do worse than reading what we wrote back then:

Keynes and MMT are the ones who fundamentally misunderstand the government’s relation to money. The proper role of government wrt to money is to define a monetary unit of account and adminstrate it through bureaus of weights and measures.

The liquidity trap occurs when all that has been disregarded, the unit of account becomes fiat, and the bulk of a nation’s money is created through lending to individuals and businesses. Without a reference point at the bottom of it all, new money issuance is deemed satisfactory so long as loans are being repaid on schedule. In fact this is the only criterion for monetary balance in such a monetary system. When that changes, and loans are no longer being repaid on schedule, lending constricts, and it cannot be otherwise. It doesn’t matter how much liquidity you supply to lenders, they can’t make loans because the borrowing capacity of the populace has dried up. They are debt saturated.

The only answer for this that Keynsians have come up with is for the government to act as borrower of last resort. But in that case government deficits explode and you wind up with Greece and the EU.

In the system that we have, the fact that new money is loaned into existence is not discretionary. There is no other option. Thus if lending isn’t possible, no new money is possible either, and the money supply will stagnate or contract, which of course makes the repayment of existing outstanding loans more and more difficult.

This is why the “helicopter drop” remarks are intended to be funny. New money cannot be distributed that way. All newly created money must be owed back into the system; that is, someone must borrow it into existence and owe it back. It is the only way in a fiat system to regulate money issuance.

The subprime “crisis” signaled that the lending saturation point had been reached in the US. Since the country had largely run out of qualified borrowers, loans were made to UNqualified borrowers. There is no one to blame for this except the people who instituted the monetary system in the first place, and they’re all long since dead. The system will always wind up in this spot after a few generations.

The WaPo article discusses the common MMT inspired idea that taxes are the method for managing the government deficits that occur as the government becomes the borrower of last resort in a liquidity trap, which is just what is happening now. The idea being that the government takes back more and more of the new money that has been issued to ameliorate the deficit issue.

This is a frighteningly stupid assertion. It seems to contemplate a monetary circle jerk where new money is created through a loan to the government, paid out to whomever as salary or pursuant to a contract, and then the recipient is heavily taxed so as to get most of the money back. At that point, the monetary system is not reflecting or facilitating or serving the real economy, rather it’s the reverse: the real economy is serving the monetary system. To say that this is pointless and perverse is an understatement.

No theory of money and credit is worth a largely hungry and homeless populace, yet this is what is happening all over the globe: the theory is more precious than reality to those who get to make the decisions. We have government by so-called “technocrats” who are devoted to an idea rather than their subjects. And the idea is ridiculous.

The answer to all this is redeemable money that can exist and be newly issued apart from being loaned. But to get there from where we are will require a jubilee, because all the debt that has piled up cannot be paid back.

And it will take a constitutional amendment.

But this is a good thing. People need to recover their sense of self-government.”

Following the comments section here would prove interesting for some people, too.

They’ve got a lot of work to do: 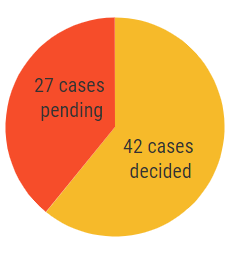 We’re especially interested in two outcomes:  this case and this case.  But we’re not going to go on and on about it.  At least, not this morning.

It’s amusing, this “sovereignty” stuff with states and whatnot.

That was the only question.  Not, dear reader, whether it’s a good idea for one state to extend sovereign immunity to another, which it usually does as a matter of comity; but rather, whether the constitution requires a state to do that.

One thing that makes this so amusing is the incoherence of it all.  44 states joined in an amicus brief that waxed poetic about the various blessings of the sovereignty of the states, the “insult to sovereign dignity” when one state is “haled” into another state’s courts, and so on (see the summary of the argument, p. 2).

As a practical matter, having 44 states on one side of the question is a strong argument that you might as well go along with them.  That’s only 6 states that haven’t weighed in.  That’s almost 90% of the litigants with the most at stake.

On the other hand, what they’re actually asking for is a limitation on state sovereignty.  Whereas before every state had the power to grant or not grant immunity to another state in its courts, now that attribute of sovereignty has been denied them:  they gave it up when they joined to union, we guess.

Why didn’t the states lobby Congress for legislation under the commerce clause to address their complaints, rather than seek a constitutional ruling from the SCOTUS limiting their own sovereignty even as they pretended to assert it?  Cheaper, we suppose.

In any case, no one on the SCOTUS got that point.  Another reason SCOTUS Justices should probably be consulting us before making their rulings.

We jest, of course.

What really animates the decision, it seems, is the reflexive hostility to the little people we have occasionally noted.  “States all too frequently find themselves the target of private-plaintiff lawsuits filed in the courts of other States.”  That’s the real sales pitch the 44 states make in their amicus brief.  That’s the actual hook the 5 Justices in the majority bit on.

Those grubby “private-plaintiff lawsuits”.  Nobody likes them, right?

To the talking heads, the only SCOTUS thing that really matters is Roe v. Wade.  Defensiveness is always revealing, no?

In any event, we can see the point.  After Hyatt, the 5 in the majority go on a state sovereignty binge and overturn Roe on that basis.  Maybe other cases in the same vein, too, like the gay marriage case (Obergefell).  Let the states work it out on their own, these contentious things like abortion and gay marriage.  Like they were already doing before Roe.  Like they were already doing before Obergefell.

Could that get interesting?  Certainly.  It’s about time we had a little fun around here.

Alabama goes one way and New York goes the other.  Let them have their way.  See who prospers and who doesn’t.

Sometimes the cases the SCOTUS decides are really about something else.  Actually, a lot of times, it seems.

A Win For Diane Russell….

In New York’s Court of Appeals.

We go back a long way with Diane.  A very long way.  She deserves a lot of kudos for this one.  It’s part of a large body of very, very good work.

The only sad part is that Diane’s win comes at the expense of Judge John DeMarco, who is one of the most thoughtful, independent and fair minded judges on the bench around Monroe County, New York.

Thoughtfulness and independence are dangerous qualities for judges.  And rare ones.

Apparently she’s returning to Italy for a visit at the invitation of the Italian Innocence Project to address the “role of the media” in “judicial error”.

Good for her.  Of course there will be plenty of hecklers.

HOMESTEAD AMENDMENT TO THE CONSTITUTION OF THE UNITED STATES

This is, you know, the “outside the box” category.

Some time ago – quite a lot of time, actually – we decided to float the idea of a “jubilee” constitutional amendment.  We felt there was no end game to the debt trap our country and indeed the world was in.  We liked a gold standard for sound money.  We objected to central banks, and the basically socialist-collectivist, yet oddly oligarchical political regime they fostered.

There were many drawbacks, however.  One was intrinsic:  it took a lot of verbiage to get the idea out.  It would have been the longest constitutional amendment ever.  That is not good, because (for example) each additional word is fuel for judicial mischief undermining the whole thing.

Another was extrinsic.  People who felt they had lived a virtuous life and had been financially responsible and paid their debts objected, often emphatically, to the idea of an across the board debt forgiveness for those who have been less responsible and virtuous.  This one is, we think, close to insurmountable.  The objection does not withstand even a modicum of sober and logical reflection but it has a stubborn, if irrational, political power.

Stubborn and irrational political power, it should go without saying, is the worst possible way to be governed.  It’s a synonym for tyranny.

But let us move on.  We think that by scaling back our ambition regarding what, precisely, we might accomplish with a constitutional amendment we can effectively address the intrinsic problem.  We have another idea, in other words.  And more specifically, in far fewer words.  This amendment would not accomplish nearly so much as the jubilee amendment but it would accomplish something very significant – far more than, say, what a lot of people seem to believe a Trump administration ever would.  Or could.

The goal here is to secure the places people reside – that is, their actual real estate and dwelling, their “homes” – so that they can never be involuntarily taken away.  This is a profound change from the regime we currently live under, where the security of one’s home is always in doubt.  We consider that current regime – how shall we put this – extremely unhealthy.  Morally, politically, socially, personally, emotionally and rationally.  We submit that “natural reason” – our preferred method for viewing and interacting with the world around us – regards the “home” primarily as a stable and secure place for people to live, and that a political regime that undermines this principle of natural reason is fundamentally dysfunctional and induces cognitive dissonance among the rulers and populace alike.

So undoing that dysfunction would be no small thing.

We set forth the text of the amendment below, all two sentences.  We invite commentary from interested readers.  All three of them.  We especially appreciate commentary directed to a) whether the reader thinks the amendment will accomplish the goal set forth; b) any significant problems the amendment has; and c) any objections to the goal along with any alternative goals the reader believes would be more suitable.

HOMESTEAD AMENDMENT TO THE CONSTITUTION OF THE UNITED STATES